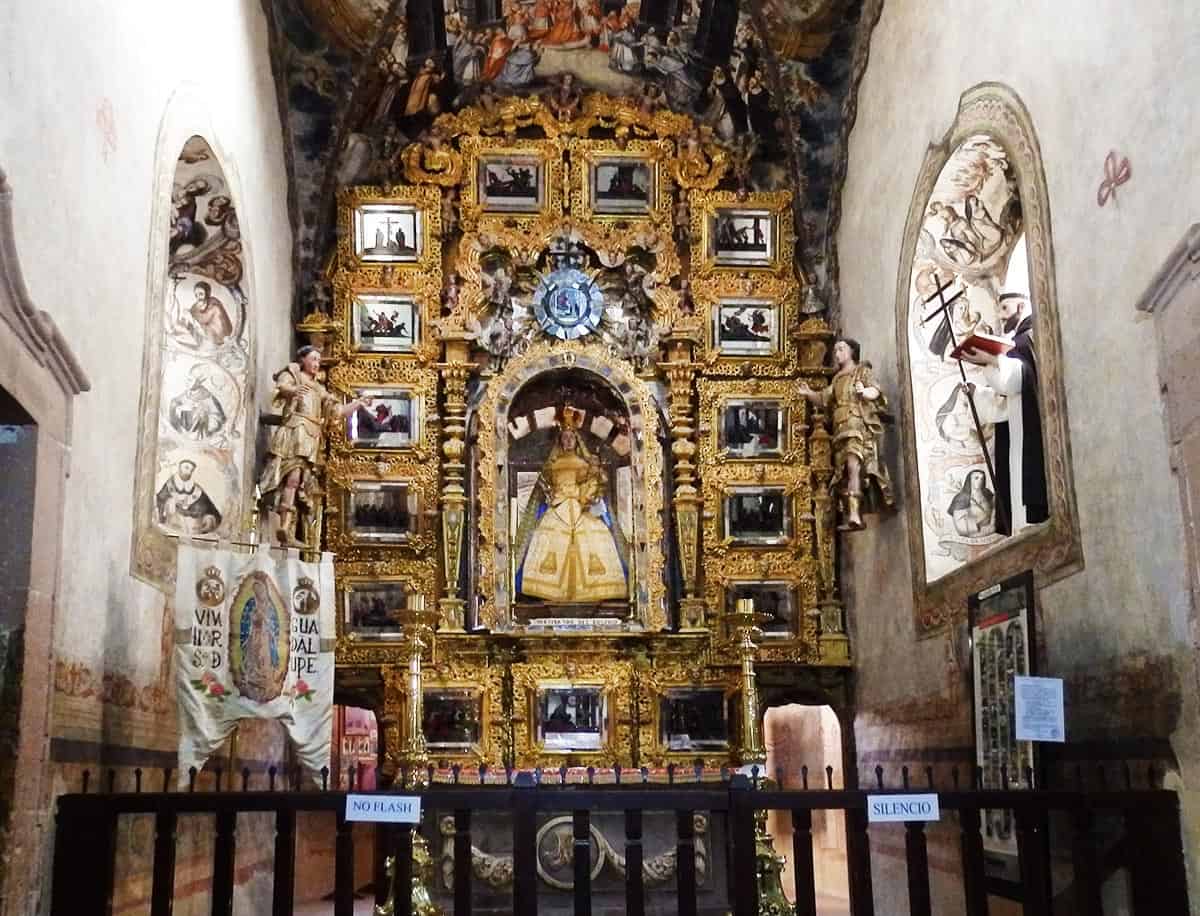 Late on a weekday afternoon, I’m sitting in a wooden pew in the Santuario de Atotonilco. The sacred tones of piped-in Gregorian chants swirl around me. Other than that, it is still, so still, I can hear the silence between the notes. So still I can feel the colors raining down from the murals over my head and all around me. So still I can almost hear the pleading of the beggars, the painful cries of the damned, and the loving tones of the saints depicted in those murals.

The Sanctuary at Atotonilco is not always so quiet. Not only is it a favorite with tourists to the area, it’s also an important pilgrimage site. Because this unassuming building is one of the holiest shrines in Mexico. It’s worth making your own pilgrimage to Atotonilco, to see why UNESCO found it worthy of being named a World Heritage Site in 2008.

The church and village of Atotonilco are located close to San Miguel de Allende. On the Dolores Highway out of town, a quick 7.5 miles/12 km past Las Ventanas Golf Club and the entrance to Valle de Los Senderos you come to the turn-off for Atotonilco, which is well signed. Another 1.5 miles/2.4 km up the road will bring you to the front of the Santuario.

Atotonilco is a Feast for the Senses….and the Spirit

As you approach the church, it gives no hint of the glory to be found inside. It’s plain white walls, 10 meters high, have a fortress look, a bit forbidding, brilliant in the Mexican sun.

The entrance to the Sanctuary is small, unprepossessing, a heavy wooden double door under a “mixtilineo” arch that faces east, towards Jerusalem. Look down as you enter and notice how the stone step before the door has been worn into a deep trough from the many thousands of pilgrims who have crossed it through the centuries, some of them on bloody knees.

You’ll likely have to stand a minute to let your eyes adjust from the bright outdoor light to the dimness of the church. Let your senses rest. Slowly tune your ears to the music, and the stillness. When you are ready, look up. Look at the ceiling above and in front of you, at the walls, at the swirl of color and energy and story that surrounds you.

This is the reason the Sanctuary of Atotonilco is often called “The Sistine Chapel of Mexico.” Nearly every inch of visible surface is covered in painted murals of flowers and virgins, cherubs and bleeding penitents, demons and their suffering victims. And everywhere, Jesus Christ, in many guises and presentations. The murals graphically tell the story of the life of Christ, especially the Passion and Resurrection, and other stories from the Gospels.

These murals are accented by sculptures, gilded altars, statues of saints, inscriptions, and painted mirrors. It all combines into a sensory whole that draws you in and holds you fast.

The church was founded in 1740 by Father Luis Felipe Neri de Alfaro. Legend says that Father Neri, who had been preaching in the nearby town of Dolores, was ill and came to this area to benefit from the supposed curative powers of the many thermal springs nearby. While resting under a tree, he had a dream in which Jesus appeared to him wearing a crown of thorns and carrying a cross. Christ told Father Neri he wanted this spot to be a center of penitence and prayer.

Construction on the church continued for the next 36 years. Father Neri commissioned a local artist, Miguel Antonio Martinez de Pocasangre, to paint the murals covering the life of Christ in “Mexican Folk Baroque” style. The style echoes Flemish painting of the era, which was known from Belgian prints brought to the New World by the Spanish.

The murals are colorful, but not in the rich and vivid way the original Sistine Chapel frescoes are. Father Neri seemed to enjoy emphasizing the bloodier aspects of his faith, and the most prevalent color in the murals is a rust red the color of dried blood. Red and black, gray and dark blue against a white base predominate in the swirling scenes.

The sides of the church are punctuated with several chapels. The Chapel of the Most Holy Sacrament seems almost stark with the contrast of its unpainted walls. But the Rosary chapel makes up for that with its ornate, heavily carved and gilded altar, centered by a statue of the Virgin of the Rosary.

Father Neri believed in physical penitence, and his church has been a pilgrimage shrine to the exercise since it was built. Several weeks of each year are set aside for rites of penitence. Pilgrims come from all over Mexico, up to 5000 in a single week.

Many finish the journey on their knees, wear hair shirts or tie bundles of spiny nopal cactus to their chests and place crowns of thorns on their heads. The penitents also include flagellants, who whip themselves with knotted ropes to experience the pain Christ felt on his way to Calvary. There are special dormitories and dining halls for the pilgrims, who can number up to 100,000 a year.

On the right side of the church, pay special attention to the statue of Christ, bleeding from being whipped and leaning heavily on a carved column. The is the famous Nuestro Señor de la Columna, Our Lord of the Column.

Every year a week before Holy Week begins, this statue is carefully wrapped in silk and linen and carried the 7.5 miles into San Miguel de Allende. Hundreds of people, carrying brass lanterns to light the dark, singing hymns, and hoisting heavy wooden palanquins with saints on top, make the pilgrimage. Bonfires along the route spur them on, and fireworks explode overhead.

The procession leaves Atotonilco at midnight and arrives in San Miguel just before dawn.

As it reaches the edge of town, the wrappings are removed from the statue, and the Christ is carried down Avenida Independencia into town. The street is decorated with banners and arches, the cobblestones covered in elaborate “carpets” with fantastical designs in colored sawdust, fresh herbs and flower petals.

Every leftover inch of the street is covered in chamomile, which sends up its heady scent as it is crushed under the feet of the pilgrims. The procession continues down the hill and ends at the Church of San Juan de Dios. This procession marks the real beginning of the Easter season in San Miguel.

Rescuing Atotonilco for the Future

After more than two centuries of dust, grime and humidity rising from the underground springs, the murals of Atotonilco were in bad shape. In 1994, the World Monuments Fund named the Sanctuary one of the world’s “100 Most Endangered Monuments.” This led to a major restoration effort in 1994.

The walls were cleaned, the church aired out. A new drainage system was installed and the foundations reinforced. The murals were restored to the highest standard by artists who had worked on the actual Sistine Chapel in Rome.

In 2008, at the time that central San Miguel de Allende was named a World Heritage Site, the Sanctuary of Atotonilco was added to the listing. It was cited as an “exceptional example of the exchange between European and Latin American cultures” and was called “one of the finest examples of Baroque art and Baroque architecture in New Spain.”

El Santuario de Atotonilco in the History of Mexico

The Sanctuary is also a place for pilgrims of Mexican history, since it occupies a special place in the country’s fight for independence from Spain. After Padre Miguel Hidalgo, a priest from nearby Dolores Hidalgo, called the people to arms and urged them to fight against their Spanish lords in September, 1810, the first place he led his rag-tag but growing army was to Atotonilco.

Here he lifted the banner of the Virgin of Guadalupe, patron saint of the Americas, from the church wall to use as his standard. Then, at the head of the troops, with banner in hand, he rode to San Miguel de Allende and the War for Independence began. A copy of the banner can be seen in the Rosary Chapel.

El Santuario de Atotonilco is a site of beauty and spiritual power, a place of pilgrimage for Catholics and artists and tourists. It’s proximity to San Miguel de Allende, makes it a perfect spot for an afternoon out of town.

The surrounding village offers many places to shop for religious souvenirs and folk art and craft or stop for a coffee or lunch. Be sure to add it to your “Must-Do” list for any stay in San Miguel.