Mexico’s Day of the Dead - a Joyous Celebration of Life 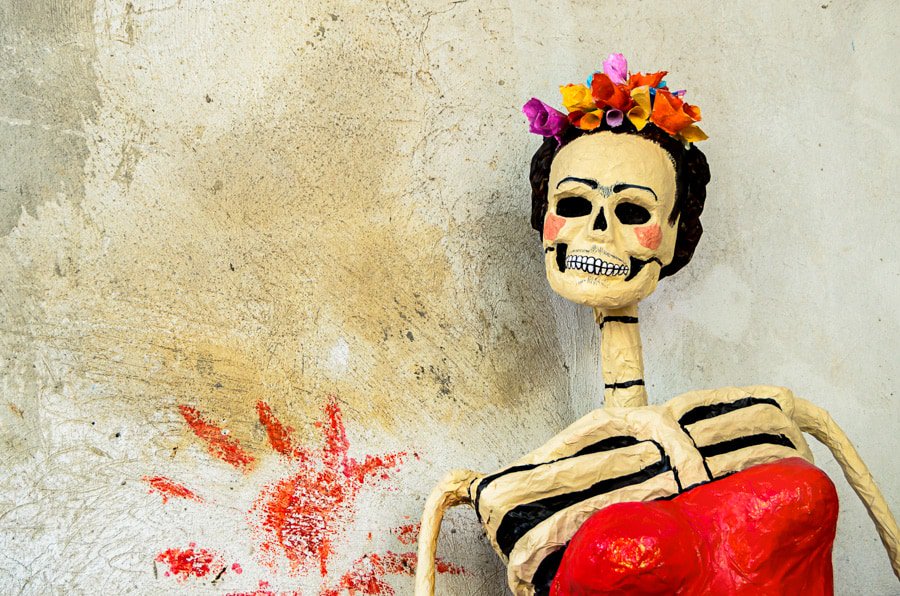 Everything you need to know about the Day of the Dead in Mexico...

There is a common misconception among people that the Day of the Dead is the Mexican version of Halloween. It stands to reason that people make this connection. Both events are at the same time of year and the imagery of skulls and skeletons is similar. While both events have their roots in the belief that it is the day that past spirits return to earth, this is where the similarities end. The way in which Day of the Dead is celebrated here in Mexico couldn’t be more different than the way in which Americans and Europeans celebrate Halloween.

Halloween, or Hallowe’en, or going back even further to Old English, All Hallows’ Eve, is a day which has dark, almost sinister overtones. It’s associated with mischief and malevolence, focusing on the darker side of spirituality. In contrast, Mexico’s Day of the Dead is a vibrant festival of color and joy. It is a day for all family members to get together and celebrate life with all of your relatives - living and dead. Day of the Dead festivities can often run all through the night. They pop up all over Mexico; in people’s houses, in public squares, and also in closed-off streets. The main public celebration for Day of the Dead is the grand parade in Mexico City, where a sea of people dressed as colorful skeletons take over the streets of the country’s capital. One of the most eye-catching features of Day of the Dead is La Catrina, a skeleton woman who is dressed in stylish early-20th Century French costume. Day of the Dead festivities happen all over Mexico. While they all have the same theme, each state has their own variations of customs and rituals to honor their past relatives. Whichever town you are in, there will almost certainly be a party which you can join to get an immersive experience into Mexico’s unique way of subscribing to life by facing death.

What is Mexico’s Day of the Dead?

Dia de Muertos, often translated as Dia de Los Muertos, is celebrated after Halloween, on the 1st and into the 2nd of November. It is a day to remember and honor those family members who have passed. Day of the Dead is not a morbid or sullen event; it is a fun family occasion filled with music and dancing. In a way, Day of the Dead is a celebration of life by confronting and acknowledging the inevitable, death. Rather than feel morose for those who have passed, Mexican’s organize huge meals and parties for living family members, inviting their ancestors to celebrate with them one more time. No other country parties like Mexico, and Day of the Dead is a really great fiesta which everyone can enjoy and be a part of. While the parties are typically rapturous, Day of the Dead also has a more quiet, reflective custom which involves making offerings to the deceased and honoring their continued life beyond the world of dust.

Day of the Dead: Origins & Beliefs

In 2008, UNESCO recognized Mexico’s Day of the Dead as an Intangible Cultural Heritage of Humanity. This is because the event has its roots in the beliefs of the indigenous cultures which populated Mexico before the Spanish arrived. The Aztecs, Toltec, and Nahua all believed that new life comes from death, and so should be considered a celebration rather than a period marked by grief. They thought that mourning the dead was disrespectful. The indigenous cultures of Mexico held a strong emphasis on remaining connected to deceased ancestors. Often, graves were laid close to family homes to maintain this tie to the past. The indigenous cultures who started the Day of the Dead believed that death was a natural part of life, and when one leaves this world, the spirit goes on to live on another plane of existence. The spirit lives on elsewhere but still bound to the dead body, and so ancestors are celebrated in close proximity to their final physical resting places. The Catholic influence from Spain eventually changed popular opinions about the afterlife, yet Day of the Dead remained as the period when Mexican’s returned to their indigenous roots and remembered their ancestors in the ways in which their relatives honored the ancient family members of the past.  At its core, Day of the Dead is filled with indigenous symbolism and ritual, and is a reaffirmation towards the old ways of life. As the dead are no longer buried close to houses, quite often, celebrations can be held at cemeteries. Graves are decorated and living family members celebrate the day in the presence of the spirit of their deceased. In some parts of Mexico, these parties in cemeteries can go on all night.

The Lady of the Day - La Catrina

One of the most widely recognized images associated with Day of the Dead in Mexico is Catrina - the sophisticated calavera woman who is dressed in stylish French costume. Catrina was conceived by celebrated Mexican artist, José Guadalupe Posada, who was poking fun at Mexico’s attempt to emulate European elegance in the early 20th Century. Posada made his point by declaring “todos somos calaveras” - “we are all skulls”. Posada’s image of “fancy Mexico” was given her name by artist Diego Rivera - La Catrina - which is a slang word  used to describe a posh person. It cemented Posada’s social commentary perfectly and went on to become one of the most recognizable and iconic images of Mexico known throughout the world.

Day of the Dead - Altars & Offerings

Away from the party, an important custom of Day of the Dead is to make an offering to the spirits which you are honoring. This is a private, reflective practice which is carried out in one’s own home. The spirits are invited into your house by placing an altar, decorating it with certain items, and making an offering (ofrenda). An altar is adorned with photos of the deceased and fragranced with fresh marigolds (cempasuchil). It should have items on it that represent the four elements: earth, wind, water, and fire, as well as any personal items or religious ornaments which the owner holds sacred.   Mexicans believe that by placing an altar they are inviting the spirit of their deceased family members to occupy and feel welcome in their home for the brief period which they return to this realm of existence. Offerings are often something that the relative enjoyed, like something sweet. It is believed that the spirit can consume the essence of the food which is offered, savoring their favorite treat once more. A glass of water is set on the altar to allow the spirit to refresh themselves after an arduous journey from the spirit world. A candle is lit to represent fire, and shows the way to the altar from the spirit world. Some customs light a candle for each soul they invite into their home. Earth is often represented by placing salt as a purifying element, however, on Day of the Dead, earth is most commonly represented by pan de muerto; a kind of sweet bread which is baked especially for this occasion. Wind is represented on the altar by papel picado. Literally translated as pierced paper, these long chains of colorful banners flutter in the wind, representing the fragility of life here on earth. Copal incense is often burned to purify the air around the altar and to transmit prayer. Papel Picado doesn’t just appear on altars, it often lines the streets and cemeteries on the Day of the Dead and is one of the defining features of the celebration. Sweet things like chocolate and sugar skulls represent death and its omnipresence. Most people associate the Day of the Dead with the stark imagery of painted sugar skulls (calaveras), which are typically offered with the deceased’s name on it. The word calavera is also used to describe a type of humorous poem which pokes fun at the living and is a part of the Day of the Dead celebrations in newspapers and magazines.